Each time before soil improvement using MMB method, an experimental plot should be formed and on the basis of the results determine the optimal method parameters – spacing and depth of handloading. As a result of the blast of explosives in a short period of time, a large amount of kinetic and heat energy is generated. Impact energy, radiating outward loads causes movement of soil particles in the soil what, in turn, causes soil compaction (sandy soils) or consolidation (organic soil). In addition, in organic soils a sand column of non-cohesive material is formed. The process is accompanied by a distinctive flux at the site of the explosion. The charge can be single or composed, but they always have to be longer than the thickness of the improved layer. Their number depends on the number of non-bearing layers. In the case of several layers it is allowed to put sequential load of explosives in one pipe. The distance between the loads depends on the distance between the layers of improved soil. Location between the loads in the blasting hole is determined by means of clamping rings. The order of firing loads in one shot point may take place simultaneously or with a certain time delay. In case of many weak layers, the explosions are set off from the lower layer to the top layer – this order eliminates post-explosion voids. After the completion of works associated with soil improvement using microblasting method, it is necessary to carry out tests and measurements confirming the desired quality of works. The measure of soil improvement is ground subsidence, on the ground of which we check the required condition of consolidation level. 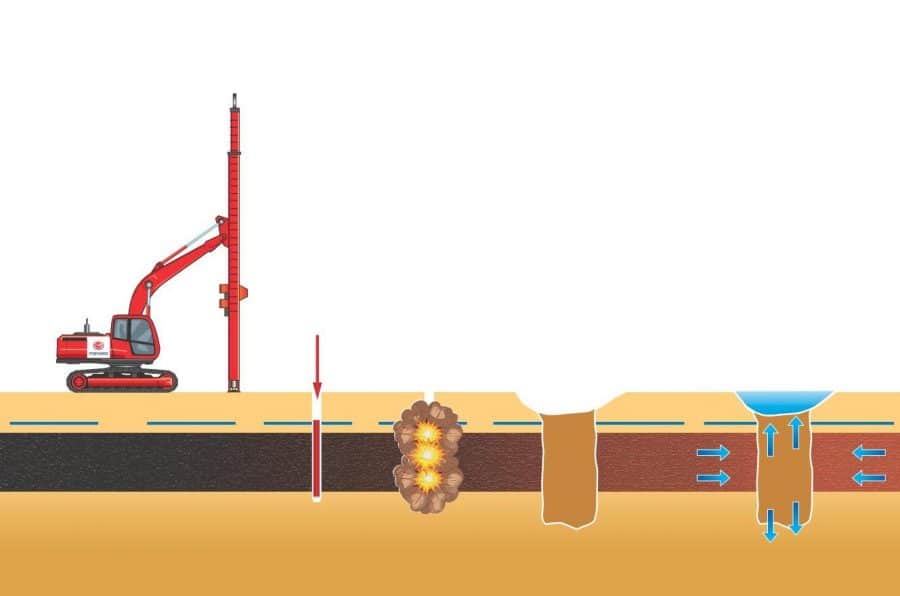 Currently, soil improvement using microblasting method is applied both in civil engineering and inland and marine hydraulic engineering. On land, this kind of soil improvement is effective only below groundwater table in organic soils and non-cohesive, particularly in areas where the grounds occur simultaneously, eg. within the borders of Żuławy Wiślane (The Vistula Delta). Due to the empirical nature of the method, before the works start, the test detonations are required and on the basis of the results the lattice grid points are determined as well as the load volume and the effectiveness of the method.

Microblasting technology is used to improve soil beneath the embankments of large linear structures like motorways and railways, as well as it can be successfully used beneath the warehouse spaces, aprons and parking substructures. The shape and cross-section formed during strengthening of the columns depend on the energy gained from the explosion of an explosive (type of explosive material and unit weight of explosive) and type of underlying soil. Spacing of the columns formed of non-cohesive soil ranges from 4.0 – 7.0 m (depending on the ground parameters). This method is competitive in relation to other methods for the scope of works of several tens of thousands square meters and considerable depth (15-30 m).